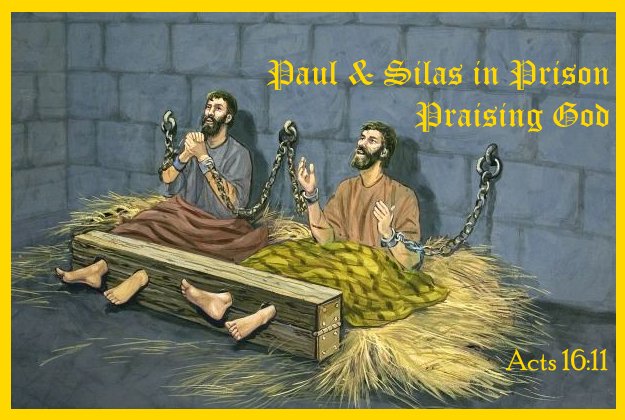 11 From Troas we put out to sea and sailed straight for Samothrace, and the next day we went on to Neapolis. 12 From there we traveled to Philippi, a Roman colony and the leading city of that district[a] of Macedonia. And we stayed there several days.

13 On the Sabbath we went outside the city gate to the river, where we expected to find a place of prayer. We sat down and began to speak to the women who had gathered there. 14 One of those listening was a woman from the city of Thyatira named Lydia, a dealer in purple cloth. She was a worshiper of God. The Lord opened her heart to respond to Paul’s message. 15 When she and the members of her household were baptized, she invited us to her home. “If you consider me a believer in the Lord,” she said, “come and stay at my house.” And she persuaded us.

Paul and Silas in Prison

16 Once when we were going to the place of prayer, we were met by a female slave who had a spirit by which she predicted the future. She earned a great deal of money for her owners by fortune-telling. 17 She followed Paul and the rest of us, shouting, “These men are servants of the Most High God, who are telling you the way to be saved.” 18 She kept this up for many days. Finally Paul became so annoyed that he turned around and said to the spirit, “In the name of Jesus Christ I command you to come out of her!” At that moment the spirit left her.

19 When her owners realized that their hope of making money was gone, they seized Paul and Silas and dragged them into the marketplace to face the authorities. 20 They brought them before the magistrates and said, “These men are Jews, and are throwing our city into an uproar21 by advocating customs unlawful for us Romans to accept or practice.”

22 The crowd joined in the attack against Paul and Silas, and the magistrates ordered them to be stripped and beaten with rods. 23 After they had been severely flogged, they were thrown into prison, and the jailer was commanded to guard them carefully. 24 When he received these orders, he put them in the inner cell and fastened their feet in the stocks.

25 About midnight Paul and Silas were praying and singing hymns to God, and the other prisoners were listening to them. 26 Suddenly there was such a violent earthquake that the foundations of the prison were shaken. At once all the prison doors flew open, and everyone’s chains came loose. 27 The jailer woke up, and when he saw the prison doors open, he drew his sword and was about to kill himself because he thought the prisoners had escaped. 28 But Paul shouted, “Don’t harm yourself! We are all here!”

29 The jailer called for lights, rushed in and fell trembling before Paul and Silas. 30 He then brought them out and asked, “Sirs, what must I do to be saved?”

31 They replied, “Believe in the Lord Jesus, and you will be saved—you and your household.” 32 Then they spoke the word of the Lord to him and to all the others in his house. 33 At that hour of the night the jailer took them and washed their wounds; then immediately he and all his household were baptized. 34 The jailer brought them into his house and set a meal before them; he was filled with joy because he had come to believe in God—he and his whole household.

35 When it was daylight, the magistrates sent their officers to the jailer with the order: “Release those men.” 36 The jailer told Paul, “The magistrates have ordered that you and Silas be released. Now you can leave. Go in peace.”

37 But Paul said to the officers: “They beat us publicly without a trial, even though we are Roman citizens, and threw us into prison. And now do they want to get rid of us quietly? No! Let them come themselves and escort us out.”

38 The officers reported this to the magistrates, and when they heard that Paul and Silas were Roman citizens, they were alarmed. 39 They came to appease them and escorted them from the prison, requesting them to leave the city. 40 After Paul and Silas came out of the prison, they went to Lydia’s house, where they met with the brothers and sisters and encouraged them. Then they left.

On April 1, 2019 this year I asked God where He wanted me to read in His word.  He actually lead me to Philippians, but as I was reading the preface of Philippians I was lead to Acts 16:11-40 about the story of Paul and Silas.

This story amazed me once again,  In fact as I just re-read it I realized that the very first bible verse I memorized as a little girl was Acts 16:31… OH MY WORD!  I had no idea that this verse landed in the middle of this story.  Thank you Jesus for this great reminder.  WOW!

As I read this story I thought of a wonderful friend of mine who had been walking a difficult road of leukemia for the last 2 years and then another friend who has walked through cancer for 7 years.  Their lives, by they way they have walked through this difficult time, have spoke to many people.  They are singing and praising Jesus even though they are wearing shackles and I am sure at times feel they have been overcome with pain and sickness.  But they still have a JOY about them that spills out on everyone they meet.

In this story one thing that stood out to me is the jailer put Paul and Silas in the center of the jail, then put shackles on their feet because if they escaped it would be on his head. So he did everything he could to protect himself for the treatment he would receive had they escaped.

By being in the center of the jail when they started to sing and praise Jesus everyone could hear them.  They may not have been able to see them, but most likely they could depending on the size of the jail.  Plus it even said they started singing at midnight, this would have been when everyone would have probably been trying to sleep, so the silence around them was filled with Praise to Jesus, and it was coming from two men who had been beaten, flogged as it said, and shackled by their feet.

But what did the praise and singing do?  It brought freedom, through an EARTHQUAKE, that shook the entire place and EVERYONE was free!  WOW!  EVERYONE WAS FREE!

But the jailer was afraid of what their freedom would do to him, because he thought their freedom meant death to him.  Hmmmm  But instead no one left, I am sure they were all amazed and thankful for their freedom, but they didn’t want their freedom to cause death to the jailer, so Paul yelled out “Don’t harm yourself, We are all here”.  The freedom of the prisoners, brought freedom to the jailer too. Because their faith in God for their deliverance, through the power of prayer seen right before their eyes “the earthquake” did not go unnoticed by the jailer.  He wanted that same Jesus and accepted him that day.

WHAT SHACKLES ARE BINDING YOU TODAY?

PRAY AND ASK GOD TO SEND YOUR ‘EARTHQUAKE’ TO FREE YOU!  YOUR FREEDOM MAY MEAN A FREEDOM TO THOSE AROUND YOU TOO!   PRAY AND PRAISE JESUS IN YOUR STORM!