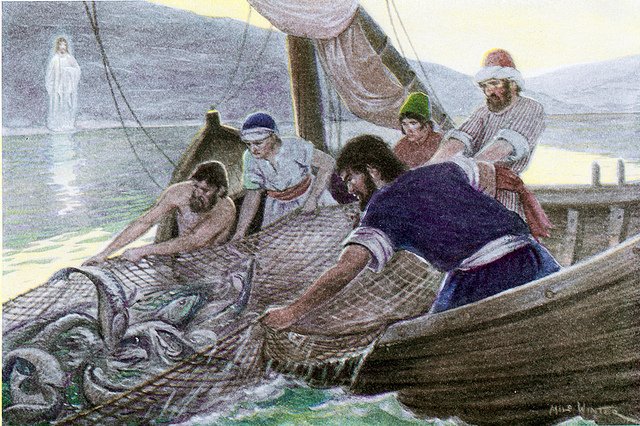 When Jesus call the disciples, they were fisherman.   Luke 5 tell us:

5 One day as Jesus was preaching on the shore of the Sea of Galilee,[a]great crowds pressed in on him to listen to the word of God. 2 He noticed two empty boats at the water’s edge, for the fishermen had left them and were washing their nets. 3 Stepping into one of the boats, Jesus asked Simon,[b] its owner, to push it out into the water. So he sat in the boat and taught the crowds from there.

4 When he had finished speaking, he said to Simon, “Now go out where it is deeper, and let down your nets to catch some fish.”

5 “Master,” Simon replied, “we worked hard all last night and didn’t catch a thing. But if you say so, I’ll let the nets down again.” 6 And this time their nets were so full of fish they began to tear! 7 A shout for help brought their partners in the other boat, and soon both boats were filled with fish and on the verge of sinking.

8 When Simon Peter realized what had happened, he fell to his knees before Jesus and said, “Oh, Lord, please leave me—I’m such a sinful man.” 9 For he was awestruck by the number of fish they had caught, as were the others with him. 10 His partners, James and John, the sons of Zebedee, were also amazed.

Jesus replied to Simon, “Don’t be afraid! From now on you’ll be fishing for people!” 11 And as soon as they landed, they left everything and followed Jesus.

So the disciples left their boats and followed Jesus.  As they walked with Jesus they witnessed many miracles, He turned water into wine, He healed a blind man and he now could see, He healed a man who could not walk, he raised a 12 yr old girl from the dead, and many many more miracles He did during their time spend with Him.

He told them often, that He would be leaving this world, but he would come back and he would send a comforter to them (The Holy Spirit), but they just didn’t understand.

When the time drew near that Jesus would die, Simon Peter came to Jesus defense

31 “Simon, Simon, behold, Satan demanded to have you,[d] that he might sift you like wheat, 32 but I have prayed for you that your faith may not fail. And when you have turned again, strengthen your brothers.”33 Peter[e] said to him, “Lord, I am ready to go with you both to prison and to death.” 34 Jesus[f] said, “I tell you, Peter, the rooster will not crow this day, until you deny three times that you know me.”

Peter loved Jesus and thought he would fight for him until the end, but the plan of God had to be fulfilled and fulfilled the way God intended it.  When the soldiers tried to take Jesus away, Peter drew his sword and cut the chief priest ear off.

47 While he was still speaking, there came a crowd, and the man called Judas, one of the twelve, was leading them. He drew near to Jesus to kiss him, 48 but Jesus said to him, “Judas, would you betray the Son of Man with a kiss?” 49 And when those who were around him saw what would follow, they said, “Lord, shall we strike with the sword?” 50 And one of them struck the servant[h] of the high priest and cut off his right ear. 51 But Jesus said, “No more of this!” And he touched his ear and healed him. 52 Then Jesus said to the chief priests and officers of the temple and elders, who had come out against him, “Have you come out as against a robber, with swords and clubs? 53 When I was with you day after day in the temple, you did not lay hands on me. But this is your hour, and the power of darkness.”

Now, after they took Jesus away the disciples scattered, I believe out of fear for their own lives.  Then Peter was faced with three different people who recognized him as being a follower of Christ.

54 Then they seized him and led him away, bringing him into the high priest’s house, and Peter was following at a distance. 55 And when they had kindled a fire in the middle of the courtyard and sat down together, Peter sat down among them. 56 Then a servant girl, seeing him as he sat in the light and looking closely at him, said, “This man also was with him.” 57 But he denied it, saying, “Woman, I do not know him.” 58 And a little later someone else saw him and said, “You also are one of them.” But Peter said, “Man, I am not.” 59 And after an interval of about an hour still another insisted, saying, “Certainly this man also was with him, for he too is a Galilean.” 60 But Peter said, “Man, I do not know what you are talking about.” And immediately, while he was still speaking, the rooster crowed. 61 And the Lord turned and looked at Peter. And Peter remembered the saying of the Lord, how he had said to him, “Before the rooster crows today, you will deny me three times.” 62 And he went out and wept bitterly.

I can’t imagine how Peter felt when Jesus looked at him.  Obviously there was much pain in his heart as it says the Peter remembered the saying of the Lord, about how he would deny him three times before the rooster crowed and then he went out bitterly and wept.

I can’t imagine  the next part of this story of how they watched evil men beat, mock and hang Jesus to die on the cross that day and just how helpless they all felt.

Then on the 3rd day after they witnessed the empty tomb and the visits from Jesus the joy they must have felt.  But then wondering, what are we going to do now?  I am sure this question was right in their face. So not knowing their futures, they return to what they knew best, FISHING….

So Peter says to disciples, I am going fishing and they all followed him.

21 After this Jesus revealed himself again to the disciples by the Sea of Tiberias, and he revealed himself in this way. 2 Simon Peter, Thomas (called the Twin), Nathanael of Cana in Galilee, the sons of Zebedee, and two others of his disciples were together. 3 Simon Peter said to them, “I am going fishing.” They said to him, “We will go with you.” They went out and got into the boat, but that night they caught nothing.

Another a night of catching nothing, probably brought back some memories, then a man (Jesus) that was standing on the shore called out:

4 Just as day was breaking, Jesus stood on the shore; yet the disciples did not know that it was Jesus. 5 Jesus said to them, “Children, do you have any fish?” They answered him, “No.” 6 He said to them, “Cast the net on the right side of the boat, and you will find some.” So they cast it, and now they were not able to haul it in, because of the quantity of fish.7 That disciple whom Jesus loved therefore said to Peter, “It is the Lord!” When Simon Peter heard that it was the Lord, he put on his outer garment, for he was stripped for work, and threw himself into the sea.8 The other disciples came in the boat, dragging the net full of fish, for they were not far from the land, but about a hundred yards[a] off.

I can’t even imagine the excitement in Peters heart, as Jesus told them to cast their net on the right side of the boat and the nets were so full,. Then realizing, I KNOW WHO THIS IS.. IT IS JESUS!  He couldn’t get to him fast enough, he even jumped out of the boat and swam to meet him.  Jesus wanted to remind him of his calling and how he called him.  Jesus had made a fire and call them all to bring some of the fish they had caught and come and eat with him.

As they sat there Jesus asked Peter a question.

Peter had walked with Jesus for 3 years and was taught by him and witnessed such great miracles, but when Jesus died, he went back to doing what he knew best and I am sure he wondered just what the purpose of the last 3 years was all about.   Jesus had not yet sent the Holy Spirit to them so I am sure they felt more alone than they had ever felt, because they had experienced Jesus presence and now He was gone.

Jesus asked Peter three times ‘do you love me?”,  three times Peter denied that he knew Jesus.  I believe there is some significance to the reason Jesus asked him three times.  The first time he said “Peter do you love me more then these?”  I believe Jesus may have been talking about the fish.  When we choose a way to make a living, we normally choose something we love and are passionate about.  I believe Peter was a good fisherman and that he may have even loved fishing.  Just like he had called him three years prior Jesus reminded him to feed my sheep and follow me.

This really spoke to me today and my heart ached for Peter after he denied him the third time and Jesus looked up at him.  Yet I also experienced the great joy when John said ‘It is the Lord!” and Peter ran to Him.  I can’t tell you how many times I have failed Jesus and even went back to my old ways of doing things.  But we are all called to feed His sheep and to follow Him and may this reminder be a reminder to all of us.  Thank you Jesus for reminding me today.  March 3, 2019